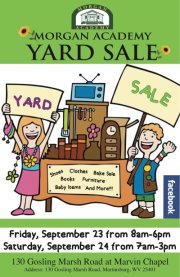 Morgan Academy will be having a yard sale with over 20 families contributing items! There will be clothing for all ages including baby, kids, teens, men’s and women’s! Other items will include books, board games, and furniture. There will also be a bake sale with lots of goodies.

Come out to support Morgan Academy, and get some good stuff!

Directions:
From Martinsburg: Take Rt. 45 toward Shepherdstown for 5.4 miles. Turn Right on Gosling Marsh Road directly after Alto’s Club. Marvin Chapel is on your left.

From Shepherdstown: Take Rt. 45 out of Shepherdstown for 2.6 miles. Turn left onto Gosling Marsh Road. Marvin Chapel is on your left.

Every spring Morgan Academy participates in the West Virginia Writers New Mountain Voices Student Writing Contest. We are pleased to announce that Morgan Academy has several winners again this year.

There were one hundred sixteen entries for the elementary division. Three out of the six winners are Morgan Academy students:

The middle school division received 82 entries. First place was awarded to Evie for “The Ghost of Will McCauley.”

Congratulations Helena, Roula, Yeredh, and Evie! And kudos to each of our students for working hard and creating wonderful stories. -Ms. Somers, Ms. Laura, and Ms. Brooke

As part of the science and environmental education program, thirty-six Ameraucana eggs have been incubating since April 26. The first chick hatched today! The children voted to name the newest member of the Morgan Academy family. Please welcome Peep! He/she is fluffy, cute, and weighs 4.5 ounces. The children and I have been using stethoscopes to listen for movement from the remaining eggs. There should be more baby chicks by tomorrow.

With just a few days of the school year remaining, students and teachers are busily preparing for our end of the year festivities, known as Family Day. Family Day at Morgan Academy is like Christmas, with much surprise and excitement for all!

Please join us Friday, June 10 at 7 p.m. at Reynolds Hall for our production of Cinderella and a student art show.

Diffendoofer Day is the first day of standardized testing every year at Morgan Academy. Hooray for Diffendoofer Day! is a book that Dr. Seuss started before his death in 1991. His publisher took his sketches, characters, and story ideas to Jack Prelutsky and Lane Smith and asked them to complete the story and illustrations. The result is a fabulous book about a school that’s a little “different-er” than the rest. When Diffendoofer School is forced to take a test, the fantastic teacher, Miss Bonkers, declares:

“You’ve learned the things you need

To pass that test and many more-

We’ve taught you that the earth is round,

That red and white make pink,

And something else that matters more-

We’ve taught you how to think.”

So, the first day of standardized testing each year, a Morgan Academy teacher reads Hooray for Diffendoofer Day! by Dr. Seuss before we start our testing. It reminds our students that they know how to think! Happy Testing!

It was an excellent gardening day at Morgan Academy! Students, parents, and teachers picked lettuce, spinach, arugula, and radishes for tasty salads. Many of the flowers and herbs planted today (zinnias, sun flowers, marigolds, portulaca, basil, and dill, just to name a few) were started from seeds by our students. Raised beds were prepared, the potatoes and peas were cared for, a new compost bin was crafted, and a lovely bed of impatiens was planted by the kids.  We were very dirty, and we loved it! Today was quite wonderful!

It’s Election Day at Morgan Academy! Students are casting their votes in the West Virginia Special Primary Mock Election sponsored by Youth Leadership Initiative. The middle school students are serving as election poll workers and helping the younger students cast their votes. We will post our election results tomorrow!

Welcome to our new website! Please be patient with us as we continue to improve this site. Check back often for updates, photos, and exciting news from Morgan Academy!